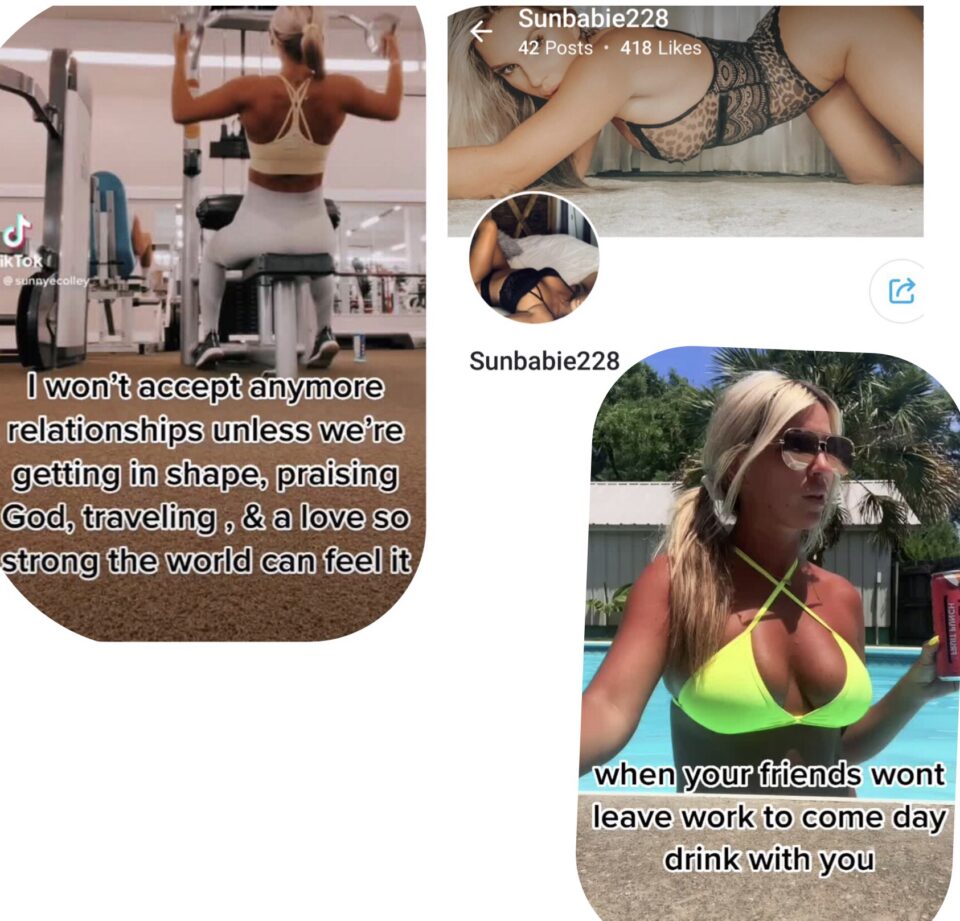 Sunnye Stobaugh Colley has always been known as a manipulative cheater who craves attention. Before she could even drive a car she was sleeping with married men. In high school she had one of her married men pay for her breast implants and another one pay for a new stereo system and rims to go on the car her daddy bought. She went from Hooters and jello wrestling to stripping in Birmingham and being an escort.
Now she’s 33 years old with multiple kids by different baby daddies. One baby daddy is a police officer who has a family, but she still uses him to help with her legal trouble. She got a DUI and is supposed to avoid alcohol, not drive (her license is suspended), maintain a job, and avoid any legal charges while she’s on probation. But she’s breaking every rule and videoing them all on her TikTok page. She’s been reported but nothing is done since her baby daddy steps in.
She’s still an escort and now has multiple $ex sites including OnlyFans. She also continues to sleep with married men for money. In the last 8 years, she’s had three affairs that played out publicly. Two of them involved families with children, and all three resulted in divorce. One of men sent his family into bankruptcy by paying off her debt and multiple plastic surgery payments. His wife contracted STDs right before they went bankrupt and was understandably beyond p*ssed. The wife found communication on her husband’s tablet including a topless pic of Sunnye with her toddler in the room watching her. The wife blurred Sunnye’s boobs and posted the pic on social media. Sunnye pressed charges on the wife, and because the husband wouldn’t testify or turn over the pictures, the wife spent a day in jail and had to pay court fees over the sl*t who had already ruined her family and finances.
Sunnye’s TikTok page is linked to her $ex sites. She pays to get higher views so she has better chance of them become subscribers to her sites. Her 10 yr old daughter’s classmate followed Sunnye on TikTok and ended up on her onlyfans page. The kids mom was upset and confronted Sunnye, but Sunnye called the mom jealous and told her to mind her own business. Now other moms know about it and will not allow their kids to go over to Sunnye’s house to play with her daughter.
There are several TikTok videos that show her toddler running around the deep end of the pool while sunnye is in the shallow end making pointless videos. There are also videos of Sunnye driving and recording herself with the toddler in the backseat.
Sunnye needs to be seen for what she is: an entitled narcissistic human who puts herself above everyone else and recklessly destroys many lives without consequence.

Duane Doherty cheated on me, gave me stds, used me, and abused me

Shaneil Sewak is a HUGE EVILDOER!!

Lillie Faust Is A Homewrecker

Heater Pierre — Bed Beat Mother Who Drinks And Brings Random Men To Her House To Fuk.