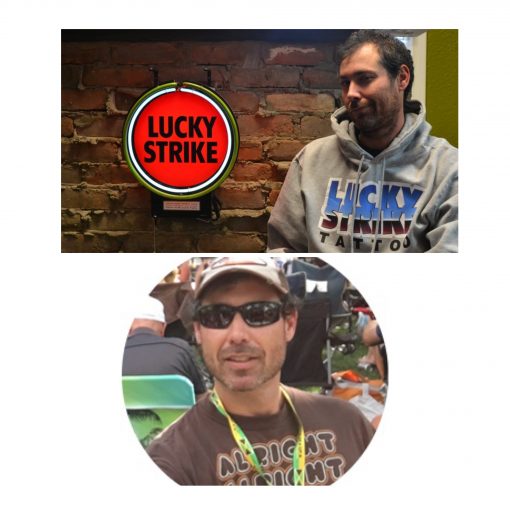 Meet Sam Sheinin. Sole owner of Lucky Strike Custom Tattoo in Edmonton Alberta. Sam calls himself a professional tattoo artist but my experience with him was nothing short of unsavoury and scary. I had previous work done at Lucky Strike years ago by an artist there when Sam was sober and him and Celina were married and ran the shop immaculately. Everything was clean, organized, well ran and the artists were amazing people. The atmosphere was beautiful and they had really talented artists working for them. Fast forward 8 years and I was looking for an artist to redo some work on my forearm (the previous artist named Forrest Mckay is a scabby fuk too and didnt want to work on his OWN work) and complete my left sleeve. I reached out to numerous reputable artists in the city including Erin Storm and Liz Venom but they respectfully declined as they weren’t interested in working on other people’s stuff. I decided to give Lucky Strike a try and sought out Sam to take the project on. He was more than happy to do the work. I commissioned him and gave a deposit. I was initially really impressed with his idea for the ink and he drew up a sketch that I really liked. During the sessions Sam’s true character came out. He would stop tattooing every 5 mins to ramble on about some story about some girl he was sleeping with who was much much younger than him (he is 47. this girl was 19. named Hope. who worked at Hooters. smfh) and “broke his heart” after she stopped talking to him. No sh1t, bro. You’re a dirty old man with a drinking problem. He confessed he fuked her in the shop and locked the doors and probably raped this young woman. He would brag about keeping her panties in a zip lock baggie and still having them around to smell them. How he has a vault of women’s sex toys including dildos and an electronic saddle called a Sybian. He would constantly ask me to get girls off Tinder for him and complain he can’t young pussy because he’s too old. What a sick fuking creeper! Endless stories and complaints about not being able to “get laid”. Stories about his drinking problems and his run ins with the police and pissing his pants. On and on and I was beginning to second guess my decision. I should have listened to my gut at the first red flag. This HACK left with me a bad infection on my tattoo. It got severely infected on my wrist and forearm to the point I needed to seek emergency medical treatment. I was placed on heavy antibiotics and had to use a cream 4 times a day for the lesions. It was pretty much a staph infection and Sam took ZERO responsibility for the infection and told me it was my improper aftercare that caused it. I could not believe the audacity of this clown. I decided to reach out to his previous coworkers and even his ex wife and my deepest fears were soon realized. All those tattoo artists left Lucky Strike on their own, they weren’t fired. Sam’s erratic behaviour including heavy drinking, hitting on other artists wives, and severe anger problems caused all of them to eventually leave Lucky Strike and work in other shops. One artist also told me that because of Sam’s controlling abusive and manipulative behaviour, a few previous coworkers needed counseling to deal with the impact he left on them. This was all I needed to confirm not going back to have the tattoo finished. His ex wife even confirmed she left him due to his increasingly sick behaviour. My lesson was learned. Never again. I urge anyone thinking of getting a tattoo to really do your research and stay far away from Sam Sheinin or Lucky Strike tattoo. He deletes any honest negative reviews you leave on his site and if you try and expose him he will call you and threaten you. Manchild pervert rapist who should never be allowed around a tattoo gun or women.