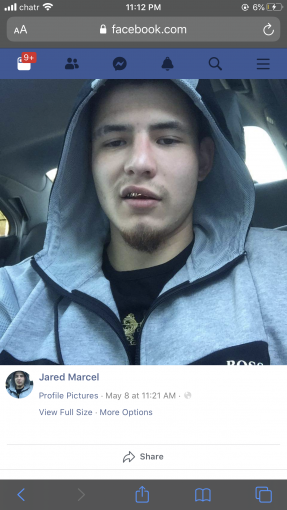 Listen up girls, ROCKY GAMBINO(Jared marcel) is one of the most used up men around, he will fuk you until he “claims” he loves you, will make you fall Inlove with him just so you’ll give him whatever he wants, money, pussy, or a comfy place to chill at & He’s the biggest narcissist I know & also loves to hear woman scream from abusing them. My friend has dealt with this loser WAY to long & you girls need to BEWARE. When she first met him he gave her DRDs through out they’re whole relationship, he has cheated on her with multiple floozys & ex’s of his because all he wants is sex, or if you have something he likes hell take it like you never owned it. He used my best friend for sex, got her pregnant & disowned them like he never met them. She would come crying to me every single time he beat her from when she found out he cheated on her & would constantly blame her for absolutely nothing but finding out the truth of his slimy ways. He’ll let any b1tch jump in his if you’re gullible enough to believe a thing he says, poor kid has to fuk woman in his car because he’s to afraid to bring them back to mommy’s & show her who he really is. He also doesn’t care about using condoms or getting DRDS, hell fuk you & act like you gave him them because he’s to scared to jump in a doctors office to get checked. His baby’s mom told me she had to drag his a55 in the doctors office and convince him to get rid of it. He acts like the biggest drug dealer in the city but can’t even afford rent & is still living at his crackhead mothers. If you have a home, food in your fridge, money in your pocket he will use you up then act like he never met you when you have nothing in exchange. Hell drive around in the city with the most ghetto Mercedes & fucks every girl he can that gets in his car. He brags about having the newest Mercedes mean while they’re barley hanging on & also made in the early 2000s. Rocky constantly try’s to fuk all of his baby’s mothers friends which makes him look so sad & pathetic, I’m pretty sure that’s how he found his baby’s mom through one of his ex’s because later on in the relationship she found out his ex was one of her best friends. Her real friends message her every single time he does & acts like he never did after we see screen shots of it all. He’s done this so many times to her, hurt her mentally & physically even with they’re child in his baby’s moms hands & still doesn’t think to stop after her and her baby after both screaming & crying on the floor. I am glad she has finally left his a55 & found someone who actually appreciates her. She would do anything she could for him & nothing was ever good enough. Rocky likes to talk mad sh1t about her & act like she’s the bad one when she changed her whole life around for him & for the sake of they’re child so he could be happy. I hope you lady’s/floozys look out for him & beware, because he’ll do nothing but scam you for sex or drag you into an emotional ride through hell & use you.

Brandii Lynn — This Trick Is A Floozy Stripper Slore Bag