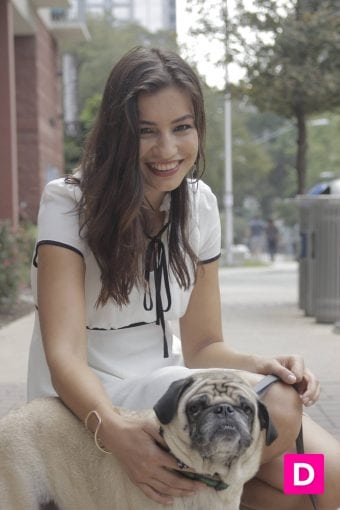 Hey Dirty Army! Let me introduce you to the most psychotic ho-bag ever debuted on this site, Jerika Maher. I became friends with Jerika mostly out of pity. She was new to Austin and a shy, awkward mess of a girl. I didn’t think she could harm a fly. Sadly, I was wrong. Jerika parades the streets of downtown Austin shilling her dog walking business “Pets Downtown.” She dresses like a total sl*t wearing revealing mini dresses, high heels, and too much lip stick. She told me many times that “sex sells” which I came to realize she means literally as well as figuratively. She flirts with men all the time even if they are married. In mid-conversation she awkwardly takes pictures of people’s dogs for her website. You can see the WTF look on people’s faces. So, cringe! She offers a “free” dog walk and afterwards spams with annoying texts and endless voicemails. Jerika is bipolar and psychotic and refuses to take her meds bragging that she “beat depression.” She told me the voices in her head sometimes tell her to do bad things, but drowns them out with Mary jane and alcohol. She is a huge pothead and can barely keep her eyes open from being beyond stoned. When she’s drunk she tells racist jokes and sings Johnny Rebel songs. She told me that she moved to Austin because “they don’t have as many n**gers as California.” She says black people are cheap and make bad customers. To make matters much worse, Jerika started dating a guy who is complete white trash, creepy, abusive, and surprise, surprise also racist. His tattoos look like they were drawn by Helen Keller. The PDA they do in public is 50 shades of gross. She confided in me that her boyfriend sometimes gives the dogs Benadryl to give the appearance that the dogs are tired from their “walks.” If the dogs bark too much her boyfriend isn’t shy about kicking them. One-time, Jerika lost a client’s dog and called me frantically asking for help to find the lost dog. It took us over 2 hours to find the dog, but the owner was none the wiser. I feel bad about participating in this and wish I could tell the owner and apologize. Jerika is mentally unstable and with her abusive, psycho boyfriend they are not fit to walk anyone’s dogs.