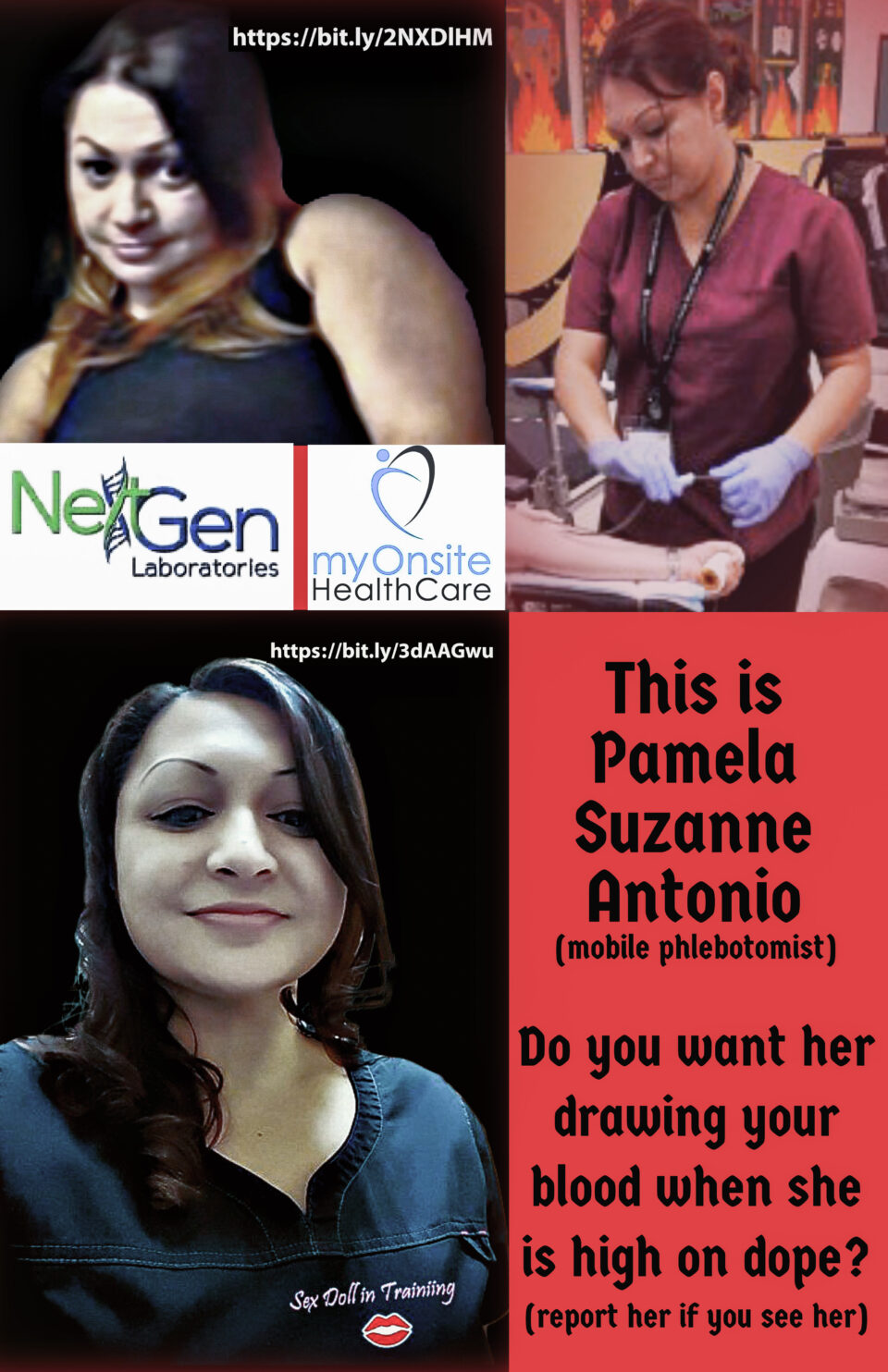 NEXTGEN Laboratories — Do you want this DOPE FIEND blindly stick a patient in the hopes of getting blood from them in your clinic? Perhaps bring a malpractice lawsuit to your clinic because this DOPE FIEND committed assault and battery by using a dirty needle due to not ensuring the sterility of all equipment in her care?

Imagine this scenario:
A contracted phlebotomist from NEXTGEN Laboratories (Pamela Antonio) begins her daily rounds of blood collections for the day. She enters room 204 to draw a 75-year-old woman patient who was admitted for atrial fibrillation. When she introduces herself and asks for consent to draw her blood, the patient shouts, “No!” and asks her to leave and not come back. The patient made it very clear that she did not want the phlebotomist (Pamela Antonio) to draw her blood.

This same phlebotomist (Pamela Antonio) has drawn the patient for several days for a Prothrombin Time (PT) and Activated Thromboplastin Time (aPTT) without incident, so she reports this situation to the nurse. The nurse informs the phlebotomist that the patient has formed a complaint against her and did not want her, in particular, to draw her blood. The blood had been drawn from the dorsal side of her hand for several days, which was now bruised and swollen. The patient complained of moderate pain, especially when she moved her fingers. Upon observation there was a diffuse ecchymosis over the dorsal side of the hand that extends up the forearm to the elbow. A blister formed at the site of venipuncture on her hand.

A formal complaint was made against the phlebotomist (Pamela Antonio) and the laboratory for not following the standard of care. The phlebotomist lost two weeks of work without pay until after an investigation took place. A charge of negligence was brought against the phlebotomist (Pamela Antonio) for drawing the patient multiple times in her hand for coagulation studies that created a large hematoma and a blister. The blister became infected and the patient needed several surgeries, including multiple skin grafts.

Pamela Antonio is a known drug user of both meth and marijuana. Her drug tests were performed with no supervision in the past as she carried clean samples with her in the test areas.

The Phlebotomy Standard Operating Procedures must be adhered and see to that Pamela Antonio is drug tested immediately and, removed from her position in your clinic if tests fail.