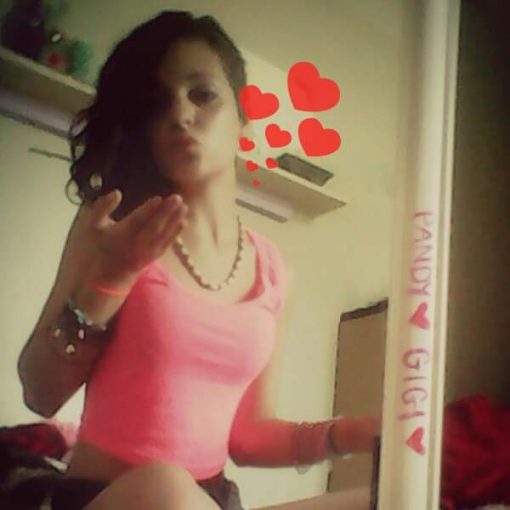 This little sloozy here is a homewrecker! First she ruined one long term committed relationship by sluttin it up and trying to pretend that she is being a friend. Then when the guy went back to the love of his life she homewreaked another girls long term committed relationship by sucking him off in their highschool!! After being beat up so many times she dropped out then waited awhile until she struck again! She would only go to the school for 1 class and spend the rest of her day meddling in the first girls relationship until she STOLE her mans away!! The guy doesn’t even like her, he likes that she is easy and puts it out for anybody! Even the guys dad kicks her out of their house by saying “Get ur fas foster care ass out of my house u skinny twig!” Now it’s a few years later and she can’t get some names out of her dick breath mouth. She stole the first guy and kept him by being his punching bag and his sex doll but she won’t leave his ex lover alone even though she moved on and has a kid with SOME1 ELSE. She threatens the poor baby and wishes she could be his mom.. because she wishes she could be the girl.. she wishes so much that she sucks her boyfriends face so much hoping to get a taste of her lips, because the ugly guy doesn’t brush his teeth or wash his face. Now she has a Facebook account with 5,000+ guys that she randomly adds to fck and suck every day ruining their relationships as well! She has nothing better to do then to suck dck, cheat, lie, start drama and be an ugly crack head bitch. Watch out for this one, if you get too close you will catch something!